2017 General Election – PFI needs to be on all candidates’ agendas

We need to talk about the future of PFI and we need to force our politicians to address the subject.

Politicians may want to shut down any discussion about PFI with the usual mud-slinging of who’s to blame – who started it – and who ran with it the farthest, but the legacy of PFI is something we all have to live with in the form of unsafe public buildings and mounting PFI debt repayments leading directly to even deeper public service cuts. 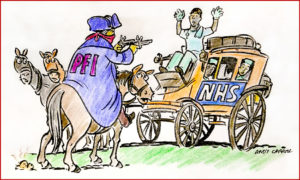 People vs PFI are therefore calling for the following manifesto pledges to be adopted:

And as a first step to end the profiteering from PFI contracts,

Further, in the light of the Cole Edinburgh Independent Schools Inquiry[i] and subsequent investigations have shown that at least 30% of Scottish PPP/NPD schools have structural and fire defects:

What Can You Do?

You don’t have to wait for politicians to act on your behalf to demand answers and reassurance on the state of your public buildings, or to ask questions about where public money is being spent, where taxes are being paid (or not) and who is profiting.

Email your councillors and all candidates in your constituency, and ask questions at hustings:

Are the candidates aware of the disastrous effect of PFI projects in this constituency?

Are the candidates aware that PFI schemes have been described by a Conservative MP as “one of the costliest experiments in public policy making ever attempted”[ii]?

Are the candidates aware that many of the firms investing in PFIs are registered in off-shore tax havens like Guernsey and Jersey? Will they therefore accept that PFIs need to be ended now and all future public infrastructure investment be funded from tax revenue or government borrowing, which is currently very cheap?

Are the candidates aware that despite numerous examples of serious fire safety and structural defects being identified in PFI built public buildings across the UK and across sectors, there have been no calls for systematic investigations and inspections to ensure that these costly buildings are even safe for public use and fit for purpose? Given that the inspections across Scottish schools in the wake of the Edinburgh Schools PFI scandal have revealed defects in at least 30% of PPP-built schools, will candidates agree that problems on this scale should not be ignored and a thorough inspection audit of all public buildings must now take place?

People vs PFI are calling for a National Safety Audit and as part of that will be coordinating a Citizens’ Audit of local authority accounts this year. If you are interested in being involved or finding out more get in touch peoplevspfi@gmail.com Our website will be updated shortly with more information

[i] Report of the Independent Inquiry into the Construction of Edinburgh Schools, John Cole, February 2017