PFI and Forest Hill School: elephants and canaries in the classroom 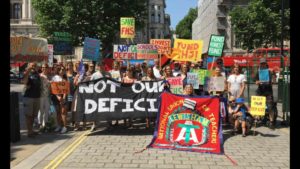 Teachers at Forest Hill secondary school in south east London have been on strike against budget cuts for 11 days this year. The school intends to tackle its budget deficit of £1.3m through staffing cuts.

But the elephant in the room is, of course and once again, the Private Finance Initiative. Forest Hill was one of three schools in the first of Lewisham’s five schools PFIs – the so-called Grouped Schools Modernisation project, which also includes Prendergast Ladywell Fields secondary and Greenvale – a special needs school.

Lewisham Council made a small step towards recognising the problem in December 2016 when the ‘Schools Forum’ established a Funding Task Group to “to consider introducing a PFI factor into Lewisham’s funding formula to support schools which have unavoidable extra premises costs because they are a PFI school”. Its report proposed using part of a surplus Lewisham had elsewhere in its budget to provide some modicum of support: “That the PFI factor funds any annual school cost of a PFI scheme which equates to more than 10% of the school’s individual formula budget.” http://councilmeetings.lewisham.gov.uk/documents/s47592/Item%206%20DSG%20Budget%20Report%202017-18.pdf

Table 1 shows that Forest Hill will therefore receive additional funding of £16,000 but still has to find £900,000 per year to pay for PFI, (an amount not that much different from the current deficit).  The sums are quite startling. On average PFI costs allocated to each of the eight secondary PFI schools amount to 11% of the individual school’s budget: in the case of Ladywell Fields (also in the Grouped Schools PFI with Forest Hill) it is a staggering 15%.

Teachers and parents have written letter, held meetings, marches and strikes but Lewisham Council has refused to meet them.

Until last night that is when a determined lobby of a joint meeting of the Council Public Accounts Committee and Children and Young People’s Committees, forced a concession from the chair that he would ‘facilitate’ a meeting between teachers and parents and the Council.

It will be interesting to see if this happens, because Councillor Paul Maslin, wanted the Council to wash its hands of the whole issue. ‘The dispute is between NUT and the school’ said the Cabinet member for Children and Young People. Others spoke of the need for schools to ‘get a grip’ on their budgets – conveniently ignoring the fact that the PFI deals were signed by Lewisham Council and that therefore only they can renegotiate them.

The atmosphere among Council members last night was variously described by angry parents and teachers as ‘complacent’, ‘despicable’, ‘a complete waste of time’. Beneath a crest of arms that proclaimed Lewisham’s motto: ‘Salus populi suprema lex’ (let the good or well-being of the people be the supreme law), and faced with 50 angry lobbyists, the councillors made no reference to the fact that the education of Forest Hill’s 1200 pupils (and potentially that of hundreds more pupils in PFI schools) was in jeopardy.

What is to be done?

The NUT has asked for additional funding from various sources and proposes that the Council extend the time that the school has to repay its deficit. The Parents Action Group addtionally calls on the council to ‘renegotiate the PFI or parts of it’.

At the meeting last night one NUT rep proposed that there be a three year moratorium on paying the interest incurred under the Grouped Schools PFI. The interest last year for all three schools in the project is £3.4m.

The owners of the Special Purpose Vehicle (SPV) – the company which signed the PFI with the Council – charges 10.3% interest per year on the loan it made for the Grouped Schools PFI, providing an income last year of £620,000 per year. Since 2006 these shareholders have received almost £6m in interest, on a loan of £5m, and with 20 years of the contract still to run can expect to receive substantial amounts more. (ByEducation (Lewisham) Holdings Ltd accounts for 2006 to 2015, Companies House). Waiving that interest for three years as a gesture of goodwill would rescue the boys’ education.

At a time of cuts, only PFI payments are ring-fenced, and those profiteering need take no part of the pain inflicted on everyone else – perhaps it is time that they should.