Merger and subsidy does NOT solve financial problems created by PFI 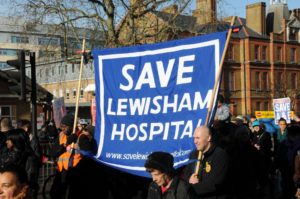 An FOI request has unearthed serious failings at a key unit of Queen Elizabeth Hospital, Woolwich (QEH). [1] This hospital was merged with Lewisham hospital in 2013 into the Lewisham and Greenwich Hospitals Trust (LGT), as a supposed way of overcoming huge PFI debts and putting both hospitals onto a more sustainable financial track.

The report, dated February 2017, details some very worrying practices, presumably a means of working round shortages and cuts: “younger fitter patients with single organ (usually respiratory) failure, would often not be admitted to the critical care unit until there is multi organ failure due to pressure on bed availability.” That is, a treatable condition becomes potentially terminal.

Many other problems highlighted stem directly from the effects of merger:

“3. Complete lack of medical leadership. There is no clinical lead at the Woolwich site. The Clinical Director is based at the Lewisham site, and has no regular clinical input at the Woolwich site. There are no regular meetings where all the consultants discuss the care of patients, development of the unit or future strategy regarding bed base, patient case load, recruitment, standards or guidelines”

“The ENT service is based at the Lewisham site, and if a critical care patient requires a surgical tracheostomy, the patient must be transferred to Lewisham. The ENT team reportedly refuse to attend the Woolwich site. The review team felt that this is unacceptable and that there should be provision for critically ill patients to receive ENT input on site.” (main report p.22)

These  findings are only the latest in a series of disturbing failures detailed in a 2015 Care Quality Commission report that the A&E department at QEH was ‘unfit for purpose’, and in the problems at the ICU revealed by the junior doctor, Chris Day.[2]

Merger of a PFI laden hospital with a nearby one is a common way to spread the costs of PFIs. Such mergers usually require significant subsidies to support both merger and future PFI payments. The Department of Health and other bodies spent £2bn between 2010 and 2015 supporting 12 mergers, often the result of financial difficulties caused by PFI contracts.[3] Nevertheless this report shows clearly the dangers of merging complex organisations.[4]

‘Bed availablity’ problems may often be traced to the effects of PFI. Loss of beds is a recurrent theme of hospital PFIs – the first wave of PFI projects saw average cuts in bed numbers of between 7 and 44%. QEH saw a 12% reduction in beds available following PFI.[5]

General financial constraints, due in part to the continuing pressures of PFI debts can be seen throughout the report. According to the government the unitary payment for QEH and Lewisham hospital in 2015-16 was £37m. £16m of support for PFI is provided by the government, leaving a total payment of £21m. The Trust’s deficit for 2016-17 is anticipated to be £20m assuming further government financial support to cover future service changes.[6]

Queen Elizabeth Hospital was built as a PFI hospital and opened in 2001. In 2009 it merged with Queen Mary’s Hospital, Sidcup and the Princess Royal University Hospital, Bromley (PRU), also PFI-built, to form the South London Healthcare Trust (SLHT).  By 2012 the PFI payments incurred by QEH and PRU had reached 18% of the Trust’s annual revenue[7] and SLHT was effectively bankrupt. Under legislation introduced by the Labour government in 2009, failing NHS trusts or ‘unsustainable providers’ could be dealt with using a ‘Trust Special Administrator’ (TSA) appointed by the Secretary of State. A TSA was accordingly appointed by Andrew Lansley in June 2012 to deal with a deficit of £150m.

The original proposal put forward in 2012 by the TSA was to merge QEH with Lewisham Hospital, but as Lewisham hospital also had significant deficits, the new trust was to be made viable by certain ‘service changes’. Essentially, these were drastic cuts to departments at Lewisham: the A&E, 24/7 adult surgical and medical emergency departments, obstetric unit, the critical care unit and two inpatient departments (paediatric and complex surgery). In addition ‘surplus’ land at Lewisham was to be sold off to developers and what remained could be used as a centre for elective surgery (a golden opportunity for private medicine). Matthew Kershaw, the TSA, made clear that such radical measures were the only way the merger could work. Anything short of the gutting of Lewisham Hospital would be: “replacing one deficit NHS Trust, unable to resolve its financial issues, with another deficit NHS Trust.”[8]

Unsurprisingly the recommendations prompted a determined local response. A campaign quickly called two demonstrations in November 2012 and January 2013, attracting crowds of 10,000 and 20,000 respectively, some of the largest local demonstrations ever seen in Britain. Nevertheless the Secretary of State for Health supported the TSA’s recommendations. Meanwhile the managements of QEH and Lewisham pushed ahead with the merger of the two hospitals, while also supporting the campaign’s demand to ‘Save Lewisham hospital’.

Some health campaigners agreed that measures were needed to tackle the financial problems but argued that, quite apart from the damage Kershaw’s proposals would to health care in the area, the annual bill for PFI was set to rise for many years: the only lasting solution had to be based on getting rid of the onerous PFI. Kershaw’s response was that his hands were tied:

The campaign’s legal challenge to the Secretary of State’s decision focused purely on the closure of key departments at Lewisham hospital and did not challenge the merger. Nor did it challenge recommendations affecting the other hospitals in the former SLHT: as a result of the TSA’s recommendations, the A&E at St Mary’s hospital, Sidcup, was downgraded forcing patients to travel long distances for care.

Merger is NOT a sustainable solution to PFI contracts, is itself costly to implement and carries increased risks to the public.

PFI was and remains one of the main constraints on the hospital’s (and the Trust’s) ability to function safely and needs to be tackled root and branch.