Carillion is a British multinational facilities management and construction services company that operates in the UK, Middle East and Canada, and has a notably poor record on ensuring workers rights and safety.

Carillion hit the headlines in the last 12 months following a series of profit warnings, delayed or collapsed construction projects, short selling of its shares by hedge funds & departure of its CEO.

As Jim Armitage reported for the Evening Standard, that sentiment sums up the trading updates Carillion made to the stock market between December 7 and July 10 2017.

After boasting of an “encouraging start to the year” in May, it admitted the truth 10 weeks later: contracts had been grossly overvalued, debts were going through the roof and the chief executive was being fired. Carillion’s shares fell 93% since.

Carillion is, or at least was, particularly active in construction and service delivery for public outsourcing Private Finance Initiative (PFI) and Public Private Partnership (PPP) contracts.

This means running schools, hospitals, prisons and other public services, and providing a range of maintenance and supply services for the private companies involved in the deals. See here for an extensive list of public infrastructure Carillion helps run and here for a database of PFI projects in which Carillion has or has had an ownership stake.

The future of the company now hangs in the balance, with Government holding crisis talks to prevent a collapse, as lenders Barclays, Lloyds, HSBC, RBS and Santander demand Government step in and bail out the struggling firm, to prevent substantial losses on their risky, unsecured lending.

You can see a breakdown of Carillion’s various operations in an investor presentation below. The key detail is the breakdown between support services, PPP and construction activities. 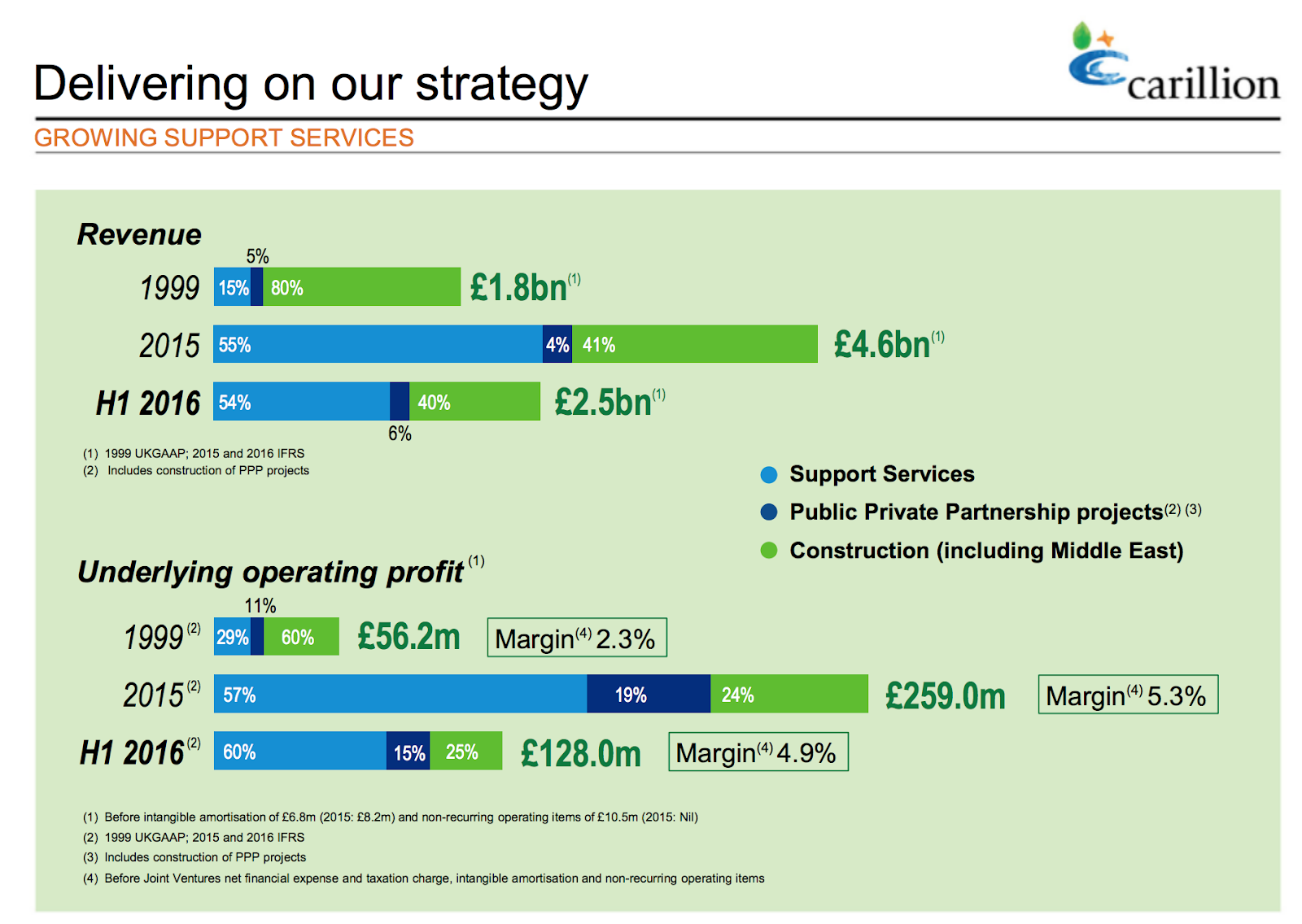 Carillion’s most profitable activity by far relative to its revenue streams is PFI/PPP contracts, which is not surprising given the extreme profit margins on PFI deals, which in some cases reach up to 70% returns per annum, from financing, building and running NHS Hospitals.

From information published in its annual accounts, it appears Carillion is being forced to sell down its lucrative PFI/PPP equity holdings, placing further pressure on revenue.

Carillion, via its lenders also extends credit to its building supply chain, which has been pressured to accept extended 120 day payment terms on invoices, driving some companies to the wall to ensure Carillion’s “financial strength.” 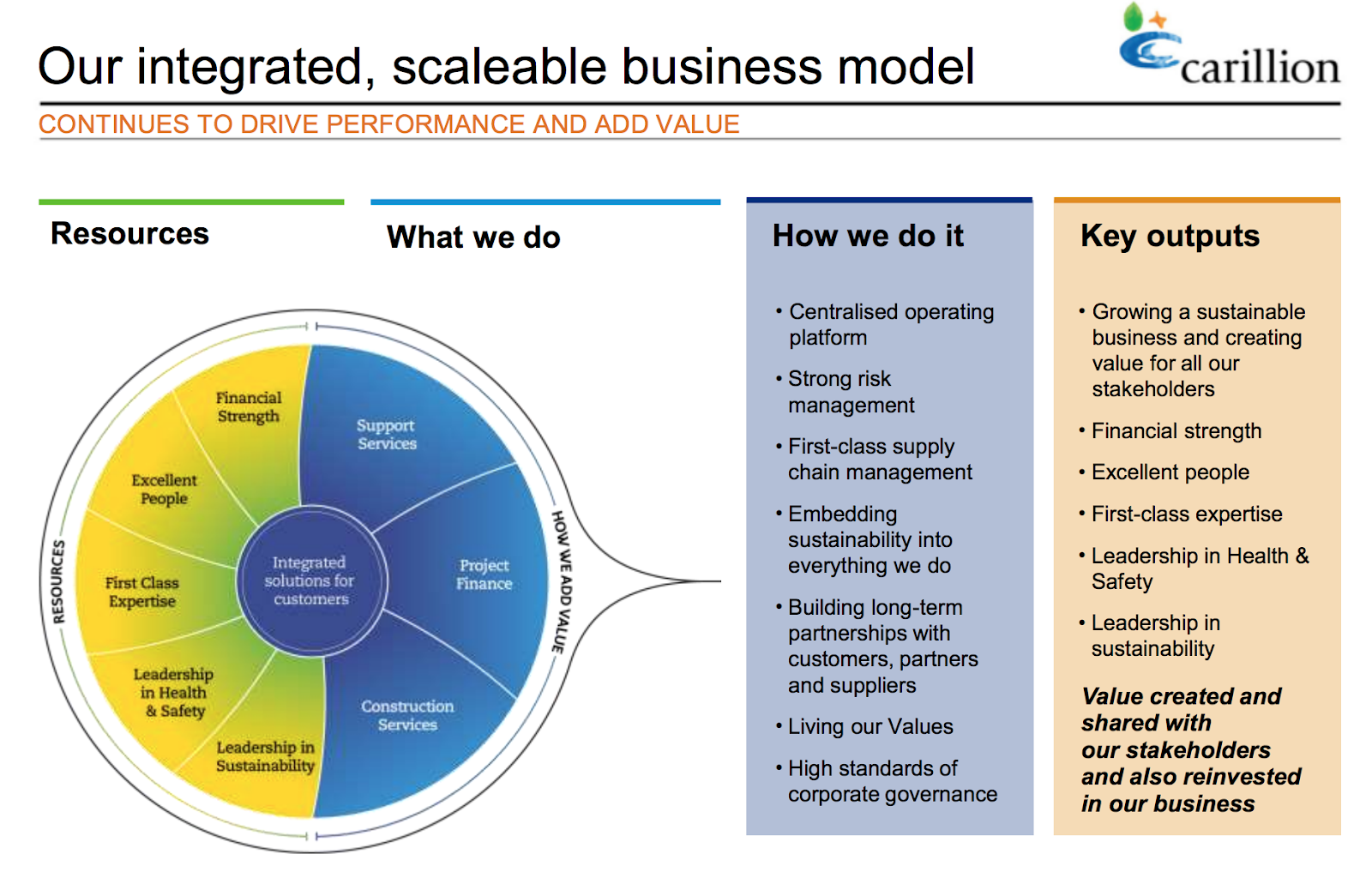 Carillion and other notable PFI companies like HICL/Infrared (prev HSBC), 3i (Previously Barclays Infrastructure), and RBS infrastructure division effectively act as shop fronts for the big banks, who use PFI as an infrastructure financing mechanism to dump billions of pounds of debt and toxic hedging instruments on the British Taxpayer, who ultimately underwrite the PFI deals.

These PFI companies are also substantially intertwined, with HICL’s largest contractor reported to be Carillion.

As at 2017, total UK PFI debt liabilities, largely due to lending banks, amount to around £320 billion, of which around £100billion has already been repaid with £222bn outstanding in 2015/16. New PPP projects have slowed to a trickle.

In the wake of the global financial crash, with Government spending constrained by bailouts, austerity and an obsession with the national debt, PFI/PPP became the infrastructure delivery model of choice for Government’s globally.

Austerity policies presented the perfect sales tool for UK bankers and accountants, who ramped up exports of PFI/ PPP to the world, using bank financing, which through accounting trickery, does not count against countries national debt piles.

Government could fund infrastructure, while pretending to the electorate there was no impact on the national debt figures, an off-balance-sheet fix which has proved irresistible for politicians, yet a disaster for taxpayers. According to The FT (circa 2012): 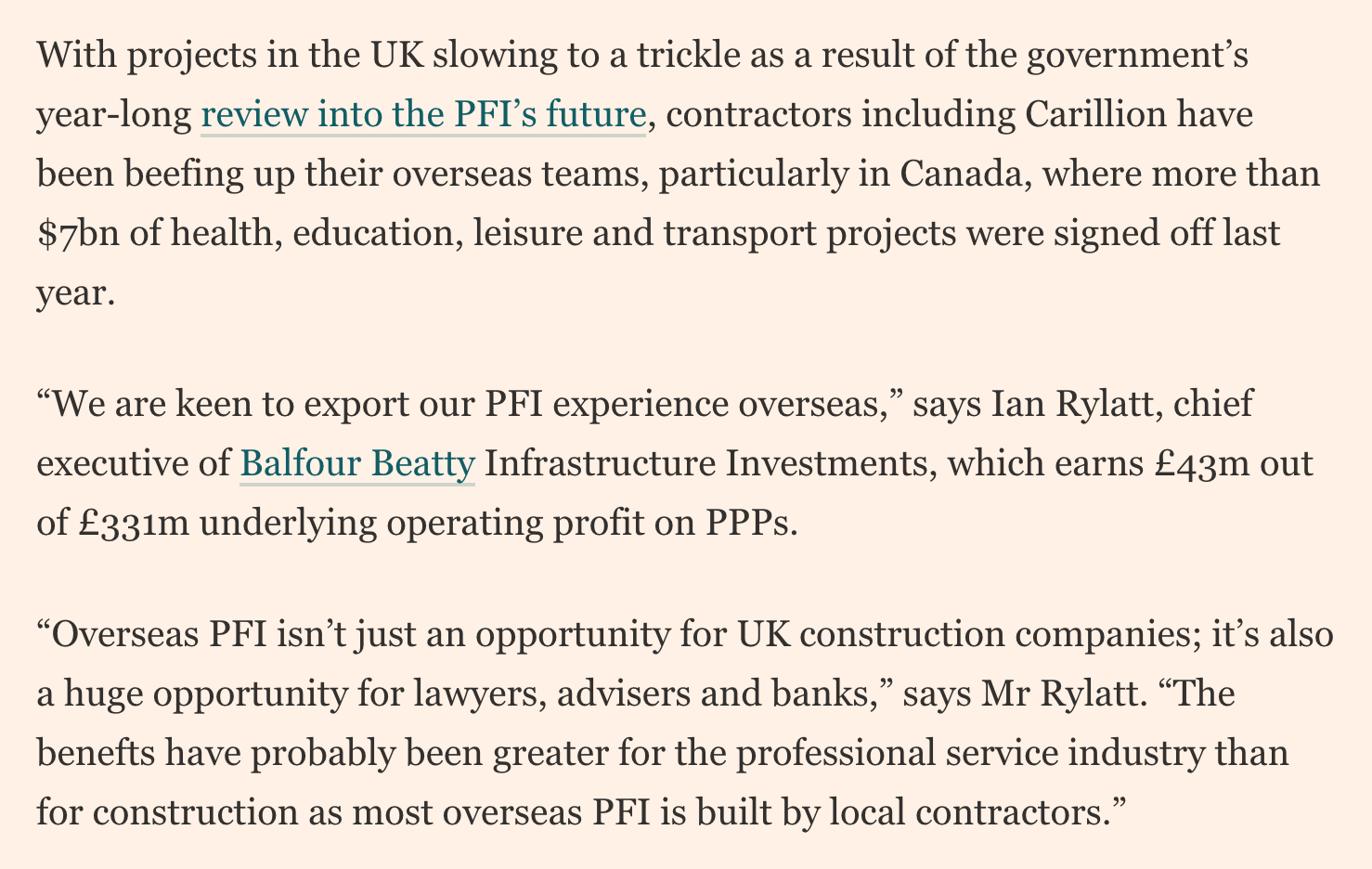 The perverse, yet intended outcome of policies of fiscal austerity is that Government interest payments and debt both increase with PPP, via borrowing at higher interest rates from foreign banks.

This has placed British politicians like Boris Johnson in the difficult position of being seen to criticise PFI at home, while championing PPP abroad as a UK “success story” – gross hypocrisy called out by the Jubilee Debt Campaign.

With leading PFI firm Carillion now in crisis, the British media are desperately attempting to circle the wagons, to prevent the kind of messy collapse which makes international media and foreign Government’s sit up and question whether PPP infrastructure is such a great deal. This is why the FT, BBC and Daily Mail for example have largely ignored the significance of Carillion’s PFI links.

Which countries use PFI/ PPP? A host of developed and developing countries from Afghanistan to Canada, Greece and France, Iraq, Portugal, Singapore and Uganda.

So what happens next with Carillion and what should we be demanding?

The absolute worst thing that could happen is Government bailing out Carillion along the lines of what it did with RBS in 2008, guaranteeing all of its debts, without imposing any formal controls on management. This must be opposed at all costs.

A 38 Degrees petition has been started by John Burgess, asking for Carillion to be nationalised and is being shared on twitter under the hashtag #NationaliseCarillionNow attracting 1200+ signatures over the weekend.

This would help resolve some problems, including poor management, abusive payment practices and most importantly, provide certainty for Carillion’s workers, suppliers and public sector service users that we will not witness a domino collapse of Carillion’s funders and sub-contractors.

Ultimately however, the fundamental issue raised by Carillion’s failure is that vital public services cannot be outsourced to private contractors, without Government underwriting the risks of collapse.

Public services threatened by Carillion’s collapse including 11,800 hospital beds, schools and prisons must now be protected by Government, not privatised to satisfy bank debts run up through risky, unsecured lending.

So-called risk transfer, where financial risk associated with infrastructure construction and operation was transferred to the private sector, to justify the higher interest on PFI loans (double the interest rate on Government loans) is, and always was, a massive con.

PFI contracts which underpin public services must now be nationalised – a policy promoted by John McDonnell at the Labour conference. A working paper has been prepared by People vs Barts PFI based on Barts NHS Hospital in London, explaining how this can be achieved by nationalising the companies (Special Purpose Vehicles) which control the PFI contracts.

Questions must now be asked about Treasury’s role in forcing PFI on public authorities via conflicted advisory body, Partnerships UK, which was owned by HBOS, RBS and HSBC and Santander – i.e. the very same banks now holding Carillion and Government to ransom for a massive bailout.