A PFI Windfall Tax – Radical Solution? or a Sticky Plaster on a Gaping Wound?

Since Carillion hit the headlines by collapsing into insolvency in January 2018, there has been a torrent of negative media coverage on the failed ideology of public sector outsourcing and the litany of problems associated with the private finance initiative (PFI) model.

Stella Creasy MP has been a frequent media commentator criticising rent seeking PFI companies – who she labels the “legal loan sharks of the public sector” in arguing for a ‘windfall tax’ on PFI company profits, as set out in a recent report from the CHPI think tank.

Asking PFI companies to pay their fair share of tax sounds (and of course is) entirely reasonable. Something the UK Treasury ought to have been doing decades ago, instead of selling out the UK taxpayer to City of London firms including HSBC, Barclays, Innisfree & foreign capitalists including Bank of America, LendLease and the US investor George Soros.

But the CHPI/ Stella Creasy proposal for a windfall tax on PFI *company* profits (PFI was assumed to be taxed at 1990’s levels by Treasury, yet tax on PFI was never recovered), demonstrates a fundamental misunderstanding of how the bulk of PFI profits are made. Through a myriad of loans between web like legal structures (SPVs) designed to shift profits offshore and avoid UK taxation – a process know as base erosion and profit shifting.

A tax strategy devised and aggressively marketed by the big 4 accountancy firms, who also advised public authorities to enter PFI’s.

In PFI contracts, according to the Treasury Select Committee, and Public Accounts Committee which investigated PFI (and of which Stella Creasy was a member in 2011), 90% of PFI project financing comes via bank debt, and just 10% is via equity investment (i.e shares). On projects such as HMRC’s Mapeley Steps PFI – the rate of interest on PFI lending is as high as 14%.

The windfall tax proposal would only touch the 10% of equity funding in PFI – leaving 90% of the financing – from usurious Too Big To Fail bank debt financing via HSBC, Barclays and RBS etc untouched. Banks do not publicly disclose profits made via PFI lending, so there is no practical means by which the banks could be made subject to the windfall tax.

Focussing on the profits of the PFI shell companies (SPV’s) and not the banks that lent billions of pounds to them is especially absurd, when you consider many of the PFI companies are actually the former PFI units, spun out from major UK banks.

Failure to address public sector rent seeking by the banks lending to PFI projects means the windfall taxes available to be clawed back is at best, 20% of the profits, made on the slim 10% PFI equity slice, or around £957m over 5years, according to CHPI.

Profits made from the PFI lending banks from servicing the debt, at interest rates above 8% – amounting to well over 50% of the entire PFI project cost during a 30 year contract remain untouched by the windfall tax proposals.

The windfall tax assumes that PFI, an inherently fraudulent and utterly discredited infrastructure policy, despised by 68% of the UK public who want PFI banned, should be allowed to continue, largely unchanged. We just need to make the companies involved pay a little bit more tax. A complete nonsense.

This is where the gulf between the politics of Stella Creasy on the centre-right/ Progress wing of the Labour party, and the Labour Leadership of Jeremy Corbyn and Shadow Chancellor John McDonnell becomes readily apparent.

John McDonnell is publicly calling for PFI to be abolished as the UK’s infrastructure financing model and existing PFI contracts and the Special Purpose Vehicles (SPV’s) that control them to be nationalised and brought back under direct public control – a policy Helen Mercer set out in this 2015 paper on PFI SPV Nationalisation. Proposals representing easily the biggest shakeup in infrastructure financing for decades, the mere threat of which has seen millions in value wiped from PFI company shares.

Arguing for a windfall tax therefore, should be considered in the broader political context of Stella Creasy undermining John McDonnell, by promoting a sticking plaster non-solution, which presents itself as radical – but fails to address the root of the problem – financial sector rent seeking from lending to, and profiting from public services – which prior to neoliberalism were funded directly by Governments at significantly lower rates of interest.

In a Progressive Britain podcast with Conor Pope and Stephanie Lloyd on hosted on the Progress Online website Stella Creasy says: ‘Progressives should always be obsessive about value for money – and PFI is like a payday loan for the public sector. ‘We can’t just break the contracts – it would cost as much to get out of the contracts as it would to keep paying them.’

Stella’s assessment, that we cannot break PFI contracts is a complete nonsense. Moody’s, the global credit rating agency has said in a memo based on an analysis of the Corbyn/McDonnell opposition proposals that should Labour wish to nationalise key infrastructure via an Act of Parliament – there is precious little preventing Parliament from doing so, and levels of compensation would be set by Parliament, not City rent-seekers and their lawyers, as Stella Creasy falsely suggests in her conversation with Conor Pope. 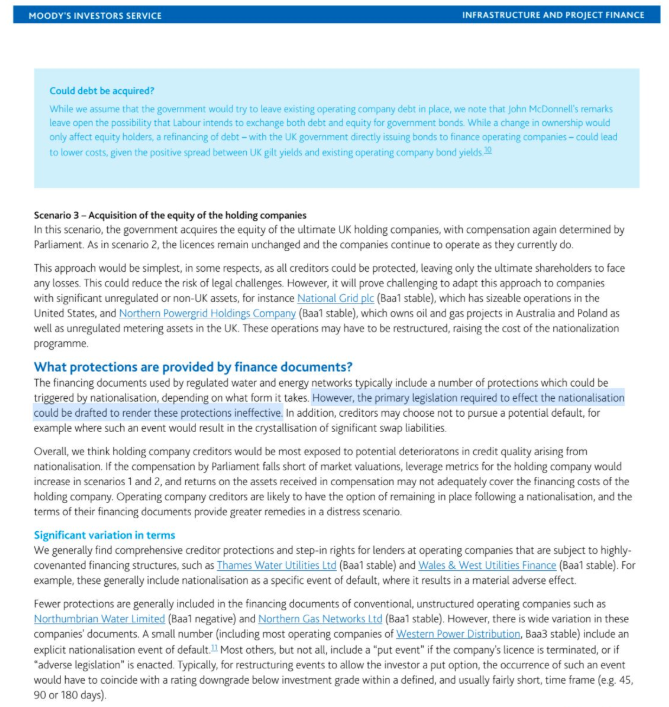 Yet Stella is presenting a credible plan to terminate PFI contracts as impossible, meaning private sector banks can continue to extract rent from public services.

On several occasions, The People vs PFI campaign has attempted to contact Stella Creasy’s MP office, requesting a meeting to discuss her position on PFI and the limitations of the windfall tax proposals. No response has been forthcoming.

It is unfortunate that Stella Creasy, who has been one of the more prominent and effective back bench campaigners in recent years, winning campaigns against Wonga payday loans, has chosen to side with the “loan sharks of the public sector” in allowing the big banks to continue to extract billions of pounds in profits from PFI.

As assessment of Scottish PFI debt undertaken by nef and Common Weal for the creation of a Scottish National Investment Bank (SNIB) found that on £40billion of PFI infrastructure financing in Scotland, a staggering £25billion was EXCESS interest to PFI bank lenders, meaning if Scottish PFI had instead been funded by a National Bank the total cost would have run to only £15billion. 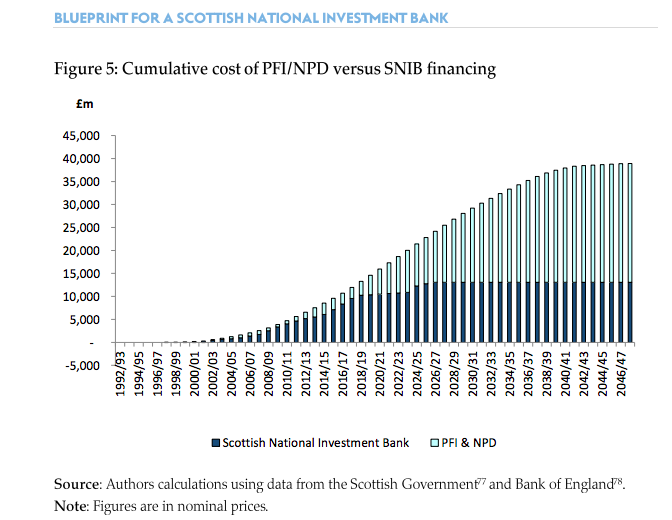 Stella Creasy and CHPI claim that £957m can be clawed back from PFI companies via a windfall profits tax. Money which would of course be welcome in a time of austerity. Yet there is no legal mechanism that could be applied to extract these windfall payments – that could not be used for nationalisation of PFI SPV’s and cancellation or write downs of the debts, at a level of compensation deemed appropriate by Parliament.

The fact £25billion could be saved in PFI interests payments alone in Scotland, suggests the figures of potential savings available for PFI refinancing across the whole of the UK are closer to £200billion – potential savings which make the £957million windfall floated by CHPI over 5 years appear chickenfeed.

In reality, the only thing preventing such savings being delivered to struggling UK taxpayers is the capture of the large swathes of both main parties by City of London financial lobby including it may appear, the member for Walthamstow.