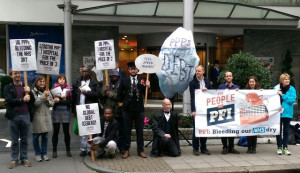 A solution to controversial PFI deals

Ending all existing PFI deals by nationalisation would pay for itself in 2 years, a research paper published by the University of Greenwich has revealed.

Rather than terminating the contracts, the paper proposes nationalising the companies at the heart of every PFI, the Special Purpose Vehicles (SPVs). This would enable the NHS, local authorities and government departments to directly pay the sub-contractors who actually provide the services, saving an estimated £1.4billion every year by taking out the middleman.

John McDonnell, Labour Party Shadow Chancellor of the Exchequer, commented: “We welcome this paper as a serious and detailed analysis of how to deal with the unacceptable burden of PFI schemes. It shows once again how public ownership can bring considerable economic and fiscal advantages, with savings of £1.4billion per year available to help reverse austerity”.

Further savings would come when the expensive private debts of the SPVs are replaced with low interest public debt. Further gains in efficiency and in workers’ pay and conditions would also be made by bringing the work back in-house.

The amount of compensation given would be decided by parliament under UK nationalisation law. Based on book value of equity, the cost would be between £2.3billion and £2.5billion. This means that nationalisation would pay for itself in 2 years.

Dr. Helen Mercer, co-author of the paper with Dexter Whitfield, said: “This proposal has been carefully costed both in relation to compensation and in relation to the precise savings for public authorities. It is based on a detailed examination of all existing PFI deals, across all sectors. It provides a comprehensive solution, and would deliver clear and immediate savings to public authorities at all levels.”

The private finance initiative (PFI) was introduced in 1992 to finance infrastructure projects by giving high rates of return to private investors while keeping the projects off the government balance sheet, and so not counting as government debt. There are about 700 PFI projects still active in the UK, with a total capital value of around £60 billion. Annual charges for these deals amounted to £10.3 billion in 2016-17, and future charges which continue until the 2040s amount to £199 billion. 24% are with the NHS, 13% with schools, 12% with Ministry of Defence, and 11% on roads.(NAO 2018 https://www.nao.org.uk/report/pfi-and-pf2/ )
ENDS

The paper now includes an annexe critiquing errors in a CHPI paper comparing policy proposals on PFI, which does not accurately present the Mercer/Whitfield proposals.